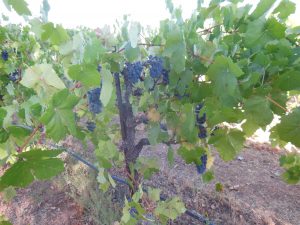 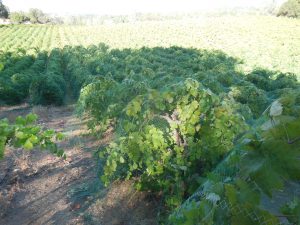 Netted primitivo from back hilltop, 8-7-16

We find ourselves in the home stretch of another vineyard season that, all in all, has gone well.  June was quite cool and pleasant by Sierra Foothills standards but gave way to a classically hot July, including a stretch of a week or more in late July in the low triple digits.  That sun/heat certainly took out part of our barbera crop, as it is particularly sensitive to high heat, and the high heat would have done more damage had veraison been a little more advanced (the riper berries being more susceptible).  Our other vines showed water stress, but the fruit handled the heat better.  We irrigate, rotating among blocks, nearly around the clock at this time of year just to keep up, and are always jealous hearing of other vineyards with deeper soils that claim not to need to water more than once or twice per season.   It must be nice!  But for those who subscribe to the struggling vine theory of grape growing—basically that vines need to struggle a little to produce quality wine grapes—rest assured that our vines struggle in July/August!

We are seeing our usual unwelcome late season weeds like mare’s tail and star thistle.  While it doesn’t help the weed control, we have finally discovered an animal that eats these and actually seems to like them:  goats.  We agreed to take care of some goats for a friend who, let’s just say, had grown unattached to the critters and was happy to see them go.  So, while we can’t trust the goats to roam the vineyard and eat the weeds—as they’d likely prefer the grapevines—we do get some satisfaction manually pulling the weeds and giving them to the goats to eat in their pasture.

Speaking of eating, nobody eats better than our indoor-outdoor house cat at this time of year.  With the deployment of the bird netting—which was unfurled with a little less cussing and marital strain than usual this year since we hired help to expedite that process—song birds are on a more even footing with our cat as they can’t simply “fly off” if they find themselves trapped inside the net munching on grapes.  The athleticism shown by our tom is truly remarkable when he’s got a semi- confined bird in his sights.  Other birds simply get themselves tangled, but they don’t remain there for more than 24 hours thanks to numerous nocturnal carnivores that seem to find them very quickly.  And this doesn’t include our local brown bear whose annual appearance has been signaled by scrunched vineyard fencing and characteristic skat.  Flocks of wild turkey are mostly in our garden but are finding their way toward the grapes.

The primitivo is a light crop this year, and we lightened the burden further on the vines by removing seconds just prior to netting the entire field in late July.  The clusters, which as noted previously experienced high “shatter” this year, have filled out somewhat with larger berries, and we hope to have enough fruit for everybody.  By getting the bird nets on as early as we did, we should maximize what was there, and we think the light crop (combined with an early-ish year) may spell another late August harvest.  We will begin sampling the primitivo grapes and posting the chemistry this coming weekend.

We will be in touch in the coming weeks with those who have confirmed grape orders for the 2016 season.  A slight surplus cannot be ruled out for any of our varietals (though less likely for primitivo), so if anyone is interested in fruit who didn’t reserve any before we sold out, please contact us and we would be happy to put you on a waitlist.  Otherwise, we will post available grapes on this site once our commitments are met, at which point you’ll need to move fast.